Does beer make you fat? 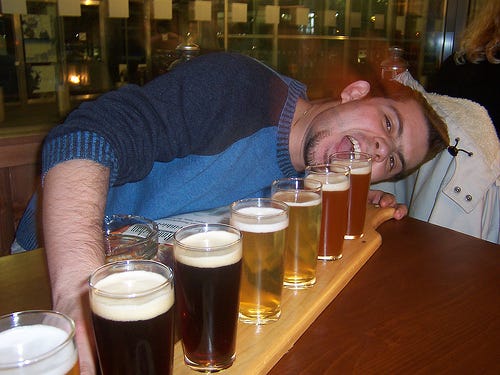 We all know drinking beer (in bigger quantities) is often associated with an increase of body fat, particulary around the belly. We like to call it beer belly. Think no more, fellas, we decided to dig deeper and tell you the truth about »beer belly« and whether you should switch your favourite alcohol to something else.

Beer is an alcoholic drink made from grain, such as barley, wheat or rye, that has been fermented with yeast. Beer is brewed in five processes: malting, mashjing, boiling, fermenting and bottling.

The strength of beer depends on the amount of alcohol it contains, which is measured as alcohol by volume. The alcohol content of beer is usually 4-6%. Howewer, it can range from very weak to exceptionally strong (even 40%!).

What are beer nutrition facts? They can vary by type, a lot! However, a small beer (355ml) with approximately 4% alcohol content, contains: 153 calories, 14 grams of alcohol, 13 grams of carbs, 2grams of protein and 0 grams of fat. Beers with higher alcohol content contain more calories! To sum up, beer is high in carbs and alcohol but low in almost all other nutrients.

Yes, yes yes. Beer increases your calorie intake (153 calories for small lager beer ... hmmm, how much did you drink this Friday?). Some studies also shown that drinking alcohol can increase your appetite in short term, causing you to eat more than you otherwise would.

It's also been shown that people don't always compensate for the calories they consume from alcohol: they don't eat less of other foods instead. This means a lot of calorie surplus.

Another reason for getting fat with a help of beer is that beer may prevent fat burning. Drinking alcohol can prevent your body from burning fat. This is because your body prioritizes the breakdown of alcohol over other sources of fuel, including stored fat.

SO! Regular drinking of beer really does make you fat ...

The question is: how much beer is normal?

We know you've waited for this forever. Studies examining this have found that over the long term, drinking beer regularly but moderately in portions less than 500ml does not seem to lead into belly fat, or fat in general. Yeah! A beer a day shouldn't do any harm.

How about other types of alcohol?

Beer is usually one of the most calorie-full beverage, so other types of alcohol like wine and spirits have fewer calories. This means they are less likely to cause weight gain and belly fat. Interestingly, drinking a proportional amount of wine actually reduces fat. How cool is that?

It still all depends on amount of alcohol you consume and how frequently you consume it. To generalize, when you exceed more than four drinks at one time it can increase your risk of getting fat, no matter what drink you choose.